Shaila will be known to many in DIAKONIA World Federation through attending Regional and World Assemblies.

Sadly, Shaila passed away suddenly on 14th September 2020 in Belgaum, India. Shaila had served as the Executive Secretary of the All India Women's Work in the Methodist Church in India. It was my  privilege to spend time with Shaila in Bangalore, and then in Chennai, and to meet other MCI Deaconesses. I wrote about my visit in 2014. Shaila is pictured below, fourth from the right.

Deepest condolences to her family, and to the MCI Deaconesses.

Born, Baptised and Schooled in Kolar, Karnataka. She was brought up in a good Christian family. She was a top student through her school and university. Shailamma was an ACC cadet and represented her school in sports and won many athletic medals at school and district level.

Shailamma lived and worked for many years in Kolar as Secretary in the accounts office. She sensed the call of God and decided to become a Deaconess. Her training was in Jabalpur. She worked as a teacher at Gulbarga, and was Principal at Belgaum,Yadgir, and Manager at BGHS and BBHS RR Nager school. She was Superintendent of Hosre Achievement.

Shailamma was sociable and friendly and always had a smile. She was a very able person. She did a lot of developmental work. In recent years she has been a member of the Executive Council, and Secretary of the Deaconesss Conference. She also served faithfully as Executive Secretary of Women’s Work.

The 40th day Memorial service honouring Shailamma's life will be held on 23rd Friday October 2020. Shailamma was a beacon of light, hope and strength to the family as well as many others in India and across the seass. 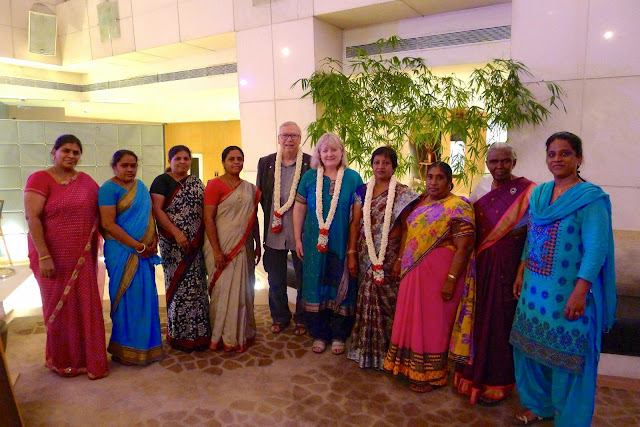 Posted by Sandy Boyce at 3:43 PM No comments:

The World Council of Churches Ecumenical Prayer Cycle this week focusses on Bolivia, Brazil, Chile, Peru. We hold in prayer the Evangelical Church of the Lutheran Confession in Brazil (Igreja Evangélica de Confissão Luterana no Brasil, IELCB) and those who serve in diaconal ministry. We uphold in prayer the diaconal sisters in Brazil (Diaconisa at Igreja Evangélica de Confissão Luterana no Brasil), and also give thanks for the faithful life of Ingrit Vogt. 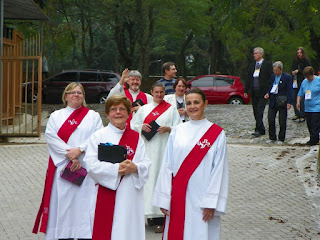 The Deaconess Motherhouse was established in 1939 by Lutheran Deaconesses working in Brazil. German immigrants had felt the lack of someone who had knowledge in the area of nursing and pedagogy. That is why they requested that Germany send Sisters with training in these areas. Soon Brazilian women desired to work as sisters. In the Women’s Congress in 1938 the foundation of a Deaconess Mother House was approved to be built on Brazilian soil. On May 17th each year the Convention of the Sisters takes place to which all the sisters are invited from close and from afar. It includes women who feel themselves called to diaconal service, who have concluded a professional secular program, without theological formation, when they do not wish to work as ministers in congregations. These women are called diaconal Sisters. Likewise pastors and catechists are accepted into the Sisterhood.

The Evangelical Church of the Lutheran Confession in Brazil (IECLB) added ordained diaconal ministers to establish a fourfold ministry, which also includes pastors, evangelists and catechists. All four ministries are considered equal in status in the church’s life, share the same salary scale, and require the same basic seminary education with special courses for each distinct ministry. The IECLB established the Department of Diakonia, which encompasses the diaconal ministers, the deaconess community and all the church’s health care and social service agencies and institutions. It also has a commitment to help mobilize people in congregations to do diaconal work. (from a paper by E. Louise Williams)

In 2016, the DOTAC Assembly was held in Porto Alegre. The theme was, Jesus’ Diakonia – From Crumbs to Whole Communion, inspired by the biblical text of Mk 7.24-30. Despite economic advancements, there are many people who still live under the table and feed from crumbs. Who are those people and why they are kept from participating on reflections and decisions that are taken around the table? What are the signs for hope and transformation? What are the chances for changing places: from crumbs to the table of whole communion? Through action and reflection, diakonia intends to promote people’s ascension from under the table to around the table. Diakonia is about "constructing tables at which all people may sit." (Rodolfo Gaede Neto)

We are thankful for:

* the distinctive rhythms, music, dance, food and natural medicine in this area

* the beauty of the region, forests, mountains, rivers, lakes, and ocean coastlines, and especially indigenous peoples’ relationship with, and care for, the natural environment

* the diversity of languages and cultures flourishing in the region despite disruptions that have occurred through colonization, and political and economic turmoil.

* Christians to have the courage, imagination and energy to build bridges of peace and understanding against conflict and division, and to pursue justice for the poor, marginalized and dispossessed

* an end of corruption in all levels of the society, including economic exploitation which impoverishes and hinders economic growth from benefitting all.

* immigrants and refugees seeking a new home, and those who accompany and support them

* cocoa farmers to find sustainable incomes from other crops, for an end to drug trafficking, and effective assistance for those who are addicted.

prepare our hands for a touch,

a new and different touch.

Prepare our hands for a touch,

a touch of encounter,

a touch of awakening,

a touch of hope,

a touch of feeling.

Many are the worn-out gestures.

Many are the movements frozen in time.

Many are the useless excuses just to repeat attitudes.

to create new titles of community,

breaking away from old ways of relating,

And the waters will flow from your altar, Lord

and flood the earth.

cared for, exposed to life.

and destroy the powers

and clean the paths

which my people will take,

in an endless celebration,

And the waters will flow from your altar, Lord,

and clean away the debris

and we will have courage to act,

to change the world.

And the waters will flow from your altar, Lord,

life will be rekindled,

and we will see the new creation,

act of your love.

Posted by Sandy Boyce at 7:10 AM No comments: