Ulrike writes:
I recently rediscovered a prayer from Coventry Cathedral in England. Even though it was written in 1959, I find that this prayer speaks to the challenges of our current situation. I invite you to join with DIAKONIA on March 26 and pray together this prayer:

In the name of Christ, our Lord.

These words are used as the response in the Coventry Litany of Reconciliation, which is prayed in the new Cathedral every weekday at noon (in the Ruins on Fridays), and is used throughout the world by the Community of the Cross of Nails. The prayer is a magnificent statement pointing to the way of Christ - of forgiveness, even in the midst of devastation.


Today the medieval ruins of Coventry Cathedral continue to remind us of our human capacity both to destroy and to reach out to our enemies in friendship and reconciliation. In 2011, the ruins were designated as a memorial to all civilians killed, injured or traumatised by war and violent conflict world-wide. In order to commemorate these civilians, the Cathedral chose six themes to guide its focus: aerial bombing, refugees, sexual violence as a result of war, landmines, child soldiers, and the environmental impact of war.

Canon David W Porter - Canon Director for Reconciliation Ministry at Canterbury Cathedral writes: “How we live with our deepest differences both within the Church and our increasingly fractured world, is one of the major challenges to the credibility of Christianity as good news.”

Some more about this Litany of Reconciliation:
Following the bombing of the medieval Cathedral on 14th November, 1940, Provost Richard Howard made a commitment not to revenge, but to forgiveness and reconciliation with those responsible. Using a national radio broadcast from the cathedral ruins on Christmas Day 1940 he declared that when the war was over he would work with those who had been enemies 'to build a kinder, more Christ-child-like world.' He had the words 'Father Forgive' inscribed on the wall behind the Altar of the ruined building.

It was this moral and prophetic vision which led to Coventry Cathedral's development as a world Centre for Reconciliation, which over the years has provided inspiration and support to many Christians addressing ongoing conflict in contemporary society. 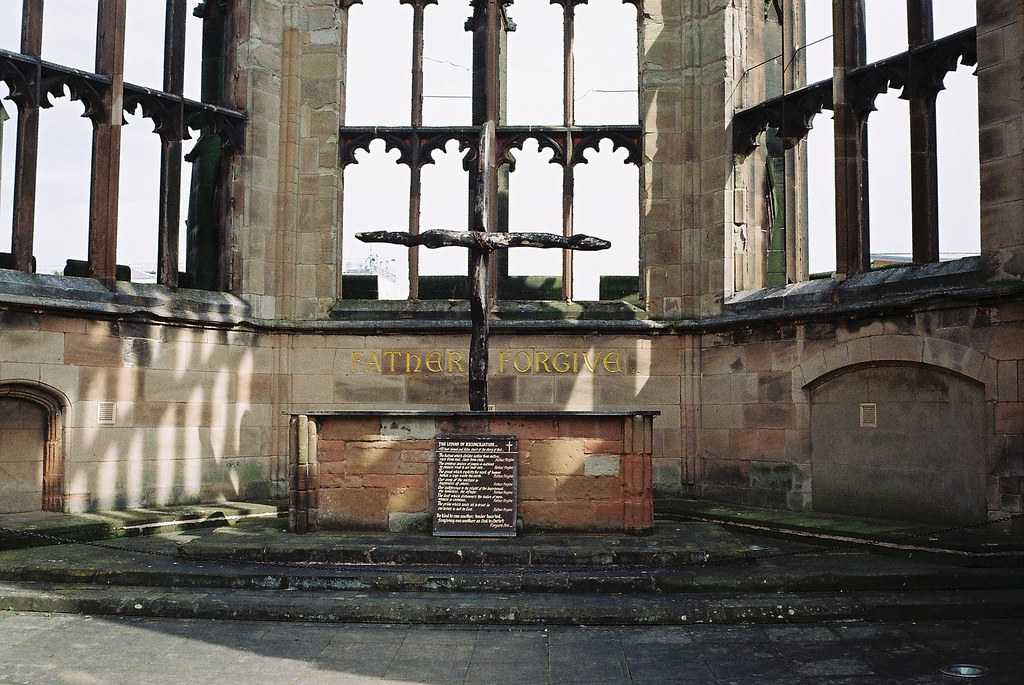