I have followed the story about the FIFA arrests this week. As Edwin Rios writes: On Wednesday, the US Department of Justice dropped the hammer on FIFA, the world governing body of soccer, indicting nine senior FIFA officials and five sports marketing execs on charges of corruption, wire fraud, racketeering, and money laundering. Allegations of bribery have long plagued FIFA, especially since its controversial decision to grant Qatar the 2022 World Cup. (The decision to award the 2022 World Cup to the rich Gulf state with a terrible human rights record was a controversial one right out of the gate. There have been extensive allegations of bribery: why else, some figured, award the Cup to a tiny country with sweltering summer heat and no soccer culture to speak of?)
The discovery of oil in the 1940s and the discovery of natural gas in the 1970s has transformed Qatar. Fifteen years ago, the country was in debt. Now Qatar is the richest nation in the world per capita. Construction and development are exploding.
And there is a great need for workers in the construction boom, and to build the stadium for the World Cup. But for foreign workers, mainly from Nepal, India, Sri Lanka, Bangladesh and the Philippines, the situation is dire. Since 2010, more than 1,200 migrant workers have died in Qatar under hazardous working conditions, and a 2013 Guardian investigation found that at least 4,000 total are projected to die before the 2022 World Cup even starts. Nepali workers weren't even allowed to return home after the country's recent devastating earthquake. Christopher Ingraham at the Washington Post put that toll in perspective in a striking infographic. He compared the number of workers who died in the run-up to several Olympics and World Cups with the number of those who have died in Qatar so far. It's horrifying: 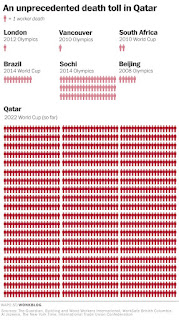 The Guardian reports that workers are dying but have no opportunity to leave their appalling work conditions. They have often borrowed money to travel to Qatar from work (between $600-$5000, with interest at 30-60% per annum!), and then the salaries they are given in Qatar are far less than they had been told. Some have had their salaries delayed by months, some for more than a year. The migrant workers are tied to their employers for the length of their contract which can be five years. Amnesty continues to campaign on behalf of the workers.

I am moved by the plight of these workers who simply seek a way to provide their families back home with a way to a brighter future. Sporting events must not be built on the backs of the poor and vulnerable, and in ways that enslave them. It should be a concern not only for sports lovers, but for all people with regard for human life, and the flourishing of human dignity. 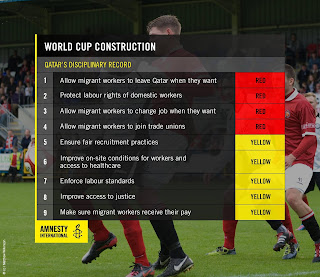 Pray that God will use this time of world focus to expose the evil and bring changes that will improve the conditions under which workers are forced to operate. Pray for justice and lasting transformation in Qatar for the lives of its migrant workers.