Lost boy of Sudan ordained as Deacon in Utah

(story by Marjorie Cortez, and published on line here)
Gabriel Garang Atem, a Lost Boy of Sudan, was ordained a deacon by the Episcopal Diocese of Utah Saturday afternoon. Atem has been serving as an Episcopal lay pastor for Utah's Sudanese community.
SALT LAKE CITY — At an age most boys spend their days at play or in school, Gabriel Garang Atem was running for his life.
It was 1987 and civil war had forced him and thousands of other Sudanese children, mostly young boys, to flee Sudan on foot to Ethiopia to escape death or induction into the northern army.
After being orphaned or otherwise separated from their families, some 20,000 Sudanese boys endured unthinkable dangers — attacks from wild animals, drowning in rivers and rebel attacks. On top of that, they were malnourished, dehydrated and were constantly exposed to the elements. Thousands were killed or died.
"It was not safe for us because there was no way you can protect yourself. You do not have weapons. You are not grown up enough so that you can defend yourself. It wasn't really a good life for us," said Atem of Salt Lake City, who is 36 years old, married and the father of twin 19-month-old boys.
One constant — the presence of God — carried him through the darkest days, he said.
When God called him to become an Episcopal priest, there was no question what he should do.
"When God called me, I accept the call because since I was a little boy, I knew I wasn’t going to live on my own without the help of God through people," he said.
On Saturday, Atem and Aimee Marie Altizer were ordained as deacons in the Episcopal Church during a service at the Cathedral Church of St. Mark. After serving as deacons for an allotted time, they can apply for ordination to the priesthood.


The ordination was another step on Atem's long journey, which took him from his home in south Sudan to Ethiopia until its government toppled, then another 1,000 miles to Kenya, where he became one of nearly 4,000 "Lost Boys" permitted to enter the United States as refugees in the early 2000s.
His ordination, he says, "sends a message to the world we are one in Christ."
The Right Rev. Scott Hayashi, Bishop of the Episcopal Diocese of Utah, spoke of Atem's unwavering faith.
Many people speak of God in a conceptual manner, "a subject of discussion or debate," Bishop Hayashi said.
"For you, God is a fact and a source of light. Whenever you speak about God, there is never any doubt in the room that God is present and I love that about you," he said.
In an interview last week, Atem said regular worship was a source of strength and a comfort in times of great adversity.
"In every (refugee) camp that we went to, we had our place for prayer. We go under the tree and pray. We have our hymnals. We have our bible translated in our language, which is the Dinka language," he said.
They were "just little boys," but they woke each day worried about the very real possibility they may not survive until the next day. "It wasn’t I worried about what will I eat tomorrow. It was 'Will I wake up tomorrow?' " he said. " 'Am I going to be able to make it to walk thousands of miles. Am I going to make it to get water. I’m thirsty and I need water. Am I going to get it?' "
He did all he could to keep himself strong and to maintain hope. Atem said he would tell himself " 'One day I will be a better person if I am still alive.' This is what happened today," Atem said of the calling and the opportunity to become a deacon and a priest.
In 2001, Atem was resettled from Kenya to Richmond, Va. He lived with a handful of other Lost Boys who had the same sponsor. They eventually found work as machine operators but their jobs were eliminated after the owner of the company decided to move his business to Canada.
"By then I was a green card holder, of which I could not go and work in Canada," he said.
So in 2004, he decided to visit friends in Utah, other Lost Boys who had been resettled in Salt Lake City.
Because he was out of work and had no other strong times to Richmond, Atem decided to move to Utah.
"In a few months I was enrolled in school to complete my high school diploma. I went to college and I got a job. I find it as a home," he said.
At first, he enrolled in sociology classes at Salt Lake Community College, planning to continue his studies in international studies.
He has also served as a lay pastor at All Saints Episcopal Church, leading worship services in the Dinka language on Sundays.
"When I got this call, I was like, well I better go to theology field instead of doing my major in some other thing," he said.
Atem enrolled in the diocese's Utah Ministry Formation Program. The program helps prepare people from Utah and other dioceses in the Intermountain West for ordination to the diaconate and priesthood of the Episcopal Church who do not attend residential seminary.
Since coming to Utah, Atem returned to Africa to visit remaining members of his family. He married Alek Kuir Akouch in 2006. "I made a process for her to come (from Africa) because by then I was a citizen of the United States. She came in 2009," he said.
The couple has twin boys, Atem Garang Atem and Kuir Garang Atem. They are named for their respective fathers.
"My wife is being supportive of this ministry," he said. "We are living happily and we support each other."
Atem said there are only a handful of Lost Boys who have become ordained ministers in the United States. "I am the first to be ordained in the Diocese of Utah," he said.
While his story and journey are far different than many people he meets in Utah, there is much to learn from one another and in the process spread hope and preach the gospel, he said.
"There is only one place we all belong, which is the kingdom of God," he said.
Utah is a welcoming place, he said. It is home, due in large measure to the Episcopal Diocese of Utah, which has warmly embraced the Sudanese community, Atem said.
"We feel welcome. Being a stranger in the house of God is really a blessing. With the help of the diocese, they see us as their brothers and sisters in Christ," he said.
Even when language barriers get in the way, there is a sense of community, love and acceptance.
Bishop Hayashi said he did not understand the words of the ordination hymn sung in the Dinka language by members of Utah's Sudanese community during Saturday's ordination service. Still, its underlying message rang through.
Because of God's constant presence, "what was once far off was brought near." 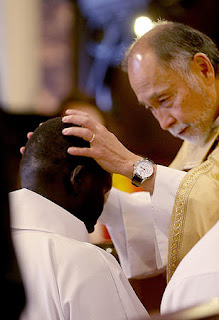 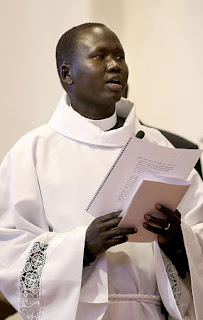 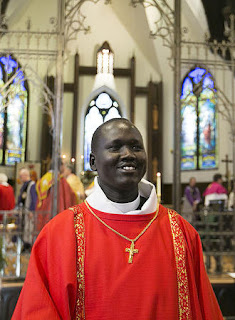 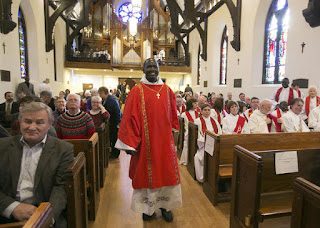