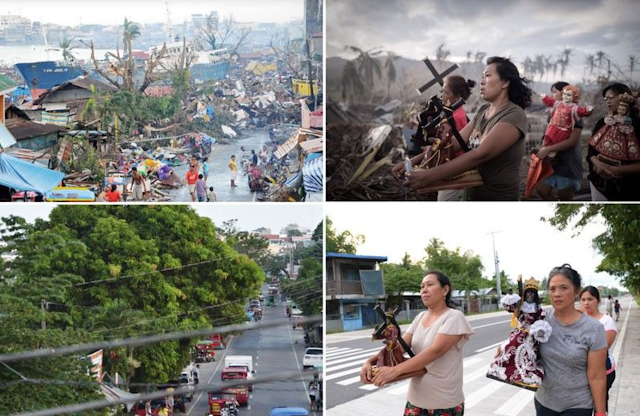 Photos: Left images shows photo taken on Nov. 14, 2013 of a ship anchored next to destroyed houses in Tacloban City (top) after it was swept ashore during Super Typhoon Yolanda and motorists along the street (lower) on Nov. 1, 2018. Right combo images shows a photo taken on Nov. 18, 2013 of survivors of Yolanda marching during a religious procession in Tolosa, Leyte (top) and women holding religious statues walking along a highway in the same municipality on Oct. 17, 2018.

TACLOBAN, Philippines: 8th Nov 2018 is the fifth anniversary of the country’s deadliest typhoon on record when Super Typhoon Yolanda (Haiyan) devastated the Philippines in 2013. Monster storms strike more frequently than previously, packing destructive rainfall that experts say is supercharged by climate change. Yolanda struck in the predawn darkness as the then strongest typhoon to ever hit land, leaving more than 7,360 people dead or missing across the central Philippines.
The wall of seawater the typhoon that was sent crashing into densely populated areas – known as storm surge – is one of the key reasons it was so deadly. Many people simply did not understand the term and did not evacuate despite official warnings.
In the Philippines, roughly 15,000 of the poorest families were ordered relocated from the worst-hit city of Tacloban, yet many have not moved and those who have are struggling. Many people have chosen to stay in the area because the government-proposed housing in a safer area doesn’t even have running water and electricity. Moustafa Osman, a Britain-based disaster management expert, said: “Everywhere the single most difficult thing to do is to move people from their own village or territory and put them in a strange place. Unless you have a proper plan and a better alternative they won’t go. Substandard housing, difficulties in earning a livelihood, no transportation and even conflict with the existing residents of a resettlement area are habitual barriers.
The peril that looms over communities in the Philippines and elsewhere is only expected to grow because of the influence of global warming on extreme weather. Oxford University climate expert Friederike Otto said there is a clear connection between climate change and heavier, devastating rainfall. The storms packing these intense rains are expected to get more harmful as the impact of climate change manifests itself, and because so many vulnerable communities live in threatened areas. “How destructive a storm is crucially depends on who and what is in harm’s way.”
(Philippines Star)

We remember our Deaconess sisters in the Philippines and pray for their safety and strength for their ministry.