The DIAKONIA World Federation (DWF) Executive Committee met online via Zoom this week. Ordinarily, we would have gathered for a face to face meeting, but travel plans had to be cancelled with the ongoing COVID-19 pandemic. We had to arrange a narrow window of time over 4 days for our meeting, as members of the Executive live in many different time zones around the world - from Fiji, New Zealand, Australia, Nigeria, Scotland, Germany, Winnipeg in Canada, and Wisconsin and Seattle in the U.S.A. So it was very early morning (5.30am) for two members and 10pm at night for many others. Those in North America were in the early afternoon - so much more civilised!
There was a good sense of community built over the 4 days of our 'virtual' meeting.
Thank you for the prayers which sustained the Executive for the fairly concentrated time as we discussed important matters for DIAKONIA.
(Draft) minutes from the meeting will be available in a couple of weeks. 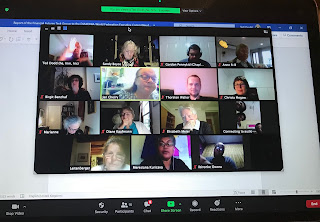