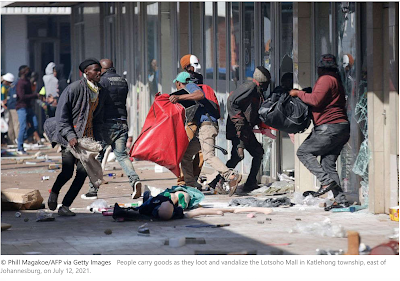 There has been considerable civil unrest in parts of South Africa following the arrest and imprisonment of former President Jacob Zuma on Wednesday (7 July), for contempt of court after failing to appear to answer corruption charges. The unrest began in Zuma’s home province of KwaZulu-Natal. President Mr Ramaphosa stated: “This is not who we are as a nation,” and called for peace. Much of the ensuing violence, looting and chaos does not appear to have anything to do with Mr Zuma’s imprisonment. There is a great deal of pent up anger after many years of suffering, and deep-seated frustrations over poor governance. Mr Ramaphosa described it as: “Opportunistic acts of criminality, with groups of people instigating chaos merely as a cover for looting and theft” and destruction of property. President Cyril Ramaphosa said that there was no justification for the violence and that it was damaging efforts to rebuild the economy amid the COVID-19 pandemic.

The situation of the country, especially in Johannesburg where a majority of the population are the Zulu (former President Zuma’s ethnic tribe), has escalated. Johan Viljoen, the Director of Denis Hurley Peace Institute) says, "There is shooting everywhere. People are standing on bridges overlooking the highways and shooting aimlessly. Burning cars can also be seen on the streets and people are running in all directions with looted items. The people’s suffering has been aggravated by the COVID-19 lockdown in the country, which has left many without any sources of income. People are suffering from extreme poverty and some are risking their lives, dodging live bullets to steal food from people’s shops because they are hungry. People have witnessed a total mess in the COVID-19 vaccine rollout where a negligible percentage have accessed the vaccination against the target masses. There is zero social assistance from the government and the people are not happy about the way the government is handling the economic crisis.” Meanwhile, South Africa is battling a severe third wave of the coronavirus pandemic driven by the highly contagious delta variant.

The South African National Defence Force has been deployed to assist the South African Police Service  in bringing the widespread chaos under control. At least 72 people are confirmed dead in the week since Zuma's arrest, and police say hundreds have been arrested.

South Africa is home to an estimated 57 million people, of whom 77% profess to be Christian. There are two member associations of DIAKONIA World Federation - The Methodist Diaconal Order, and the Highveld Deacons.

Please remember the people of South Africa in your prayers at this crucial time:

* for an effective response to the current crises

* for the protection of life and property

* for believers to be voices for peace and reconciliation

* for unity and reconciliation across all ethnic groups

* for those in positions of leadership

* for a solution to the poverty and unemployment people are experiencing

* for containment of the COVID pandemic