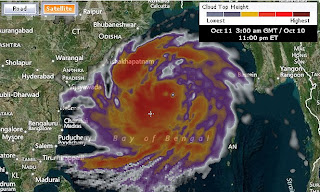 Cyclone Phailin is the most powerful storm India has faced in more than a decade. Phailin is a Category 4 cyclone, one notch below the most powerful Category 5 super storm like the one that hit Odisha in 1999 for 30 hours, killing almost 10,000 people.
Satellite images showed the storm, in the Bay of Bengal, was  about half the size of India. Eye witness reports said the powerful winds on Saturday snapped trees like matchsticks, swept away rooftops besides flattening paddy crop across a large swathe of farmland, and uprooted trees. It caused large-scale power and communications outages and shut down road and rail links, and was expected to have caused extensive damage to crops.
Thankfully the cyclone began to wane on Sunday morning local time, nearly 12 hours after it made landfall. Strong winds and heavy rains continue to lash the coastline, threatening floodings and inundation of low-lying villages. Thankfully casualties  have been limited, with more than half a million people evacuated prior to Cyclone Phailin reaching land in what is said to have been the biggest peacetime human movement in the country in 23 years.
Please pray for the diaconal ministries in India, particularly those in the eastern part of India in the affected areas. There are three associations: Methodist Deaconess Ministry India, Tamil Evangelical Lutheran Church Bethania Deaconess House and CSI Order of Women in the Church of South India Women's House.