Update: Great news that the group of 45 Fijian peacekeepers have been released, two weeks after they were captured by Al Qaeda linked militants in the Golan Heights. All the peacekeepers are in a good condition.
Prime Minister Mr Bainimarama said his country would continue to be involved in the UN's peacekeeping efforts. "It is a noble mission, which we will continue to perform whenever we are called on by the United Nations to serve. For the families, as for all Fijians, it is a matter of great pride that our peacekeepers are able to make such a significant contribution to the wellbeing of others who are less fortunate than us – who are vulnerable living in places that have been torn apart by division and violence."Fiji currently has 734 personnel on UN peacekeeping missions, of which the majority are troops. Since independence from Britain in 1970, Fiji has sent more soldiers on UN peacekeeping missions than any other nation, on a per capita basis. The deployment provides Fiji's economy with much-needed hard currency and helps to bolster its global image. 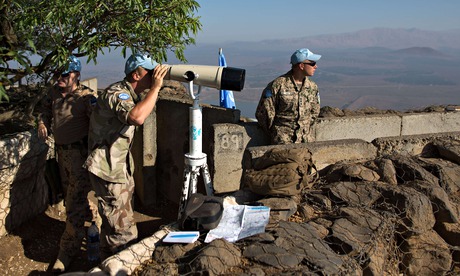 The news about the capture of the UN peacekeepers from Fiji
It is distressing to hear the news that 45 UN peacekeepers from Fiji have been captured by Al-Qaida linked insurgents. In a statement posted online, the Nusra Front group published a photo showing what it said were the captured Fijians in their military uniforms along with 45 identification cards. The group said the men "are in a safe place and in good health, and everything they need in terms of food and medicine is given to them."
UN Secretary General Ban Ki-moon has spoken with the Prime Minister of Fiji and promised that the United Nations was "doing its utmost to obtain the unconditional and immediate release" of the Fijian peacekeepers.
Meanwhile, the Methodist Church in Fiji and Rotuma, and the Fijian Council of Churches, has held a prayer vigil for those who have been captured. Please join our brothers and sisters in Christ in Fiji in their prayers for the safe release of the 45 held captive.