This weekend I joined vocational Deacons in the Anglican Church in New Zealand for their annual Deacon school (photos here of Deacon school 2016). The venue is the House of Compassion just outside of Wellington in a large reserve.

The House of Compassion states its values in this way: 'Through our compassion, faith and integrity, we seek to bring dignity to the lives of the aged, the powerless and the poor', following the example of Jesus, and the legacy of Mother (Suzanne) Aubert, a Catholic nun.

'Jesus’ mission is our driving force. It gives life and shapes all that we are about in our service to the community. We place high value on every person being created by God. Everyone is unique and loved; every person having a basic right to life, respect and honour; the earth as our primary resource.

Ven Anne Russell-Brighty, Archdeacon for the Household of Deacons in the Diocese of Christchurch, is the co-ordinator. She has written and tutored the History of the Diaconate course for EITDS. Anne has also previously run a three year course for vocational deacons training in Christchurch. Anne has a background in community work and ministry to the elderly.

I met Anne after she visited Adelaide in October last year, and have enjoyed meeting other Anglican Deacons in New Zealand. (I read an article on theological insights into refugee policy, by Deacon Becky Heale). As well, some of the Methodist Deacons have been present for the first few days.

I have been asked to speak on the topic, 'The Story of Deacons worldwide and across denominations, DIAKONIA World Federation and DANZA.

Climate justice grows ever more urgent for Pacific islands: A statement by the WCC Working Group on Climate Change (May 16, 2017)

For Pacific island nations, climate change is more than a political concern - it’s rapidly leading to extinction of peoples, lands and a way of life. In one of the biggest examples of environmental injustice in the world, the Pacific region is extremely vulnerable to climate change, despite contributing minimally to global greenhouse gas emissions.

The effects of climate change have become an urgent part of everyday life for Pacific islanders, said Rev. Tafue Lusama, general secretary of the Tuvalu Christian Church. Tuvalu is an island nation located in the Pacific Ocean, about midway between Hawaii and Australia.

“We are already experiencing increased intensity of tropical cyclones, severe storm surges, coral bleaching, saltwater intrusions, coastal erosion, changing rain patterns, submersion of islands, and ocean acidification,” said Lusama, general secretary of the Tuvalu Christian Church. “This puts us in the Pacific at the brink of extinction. It challenges our very survival from the very basic sources and core of our existence.”

He voiced his concerns during a meeting of the World Council of Churches (WCC) Working Group on Climate Change, which is preparing its advocacy plan for the the 23rd Conference of Parties (COP 23) of the United Nations Framework Convention on Climate Change.

Meeting from 8-10 May in Wuppertal, Germany, the working group decided to focus on the Pacific region.

“A crucial task is to ensure that the various mechanisms under the Paris Agreement such as ‘climate finance’ and ‘loss and damage’ really help Pacific islands to build climate-resilient and equitable societies,” said Athena Peralta, WCC programme executive for economic and ecological justice. “By scaling up financial contributions and technology transfer, affluent and industrialised segments of society that are mainly responsible for climate change can begin to recompense their ecological debt to Pacific peoples.”

What can churches and individuals do?
“Faith communities can contribute to the discussion on ‘loss and damage’ which seeks to address irreversible loss and destruction due to climate change of homes, lands and Indigenous ways of living. Often these have deep spiritual, non-material value. The loss or destruction of your homeland, for instance, cannot be measured,” said Rev Henrik Grape, coordinator of the working group. “How do we as churches play a healing role and let the voices of the affected be heard? How can our faith communities become cradles of a hope that grows?”

Interfaith engagement remains an important strategy for COP 23, he added. “Together faith communities have to be relentless in reminding the world that the climate crisis is a moral issue. We need to continue to deepen multi-faith relations not least in a context such as Fiji, with at least 30 percent of the population identifying as Hindu,” said Grape.

Composed of theologians, experts and activists from around the world, the WCC Working Group on Climate Change discussed challenges to climate action – such as the lack of concern for just policies by the Trump administration in the USA, the weakening of climate justice laws as the UK leaves the European Union, and the urgent need to support a rapid transition to a decarbonised economy, particularly in the USA but also around the world.

During the meeting, the working group also tackled strategies to promote climate justice in the current political and economic environment following the landmark Paris Agreement drawn up in 2015.

The Paris Agreement, which came into force in November last year, aims to keep global warming to below 2 degrees Celsius above pre-industrial levels. Building on COP 22 held in Marrakech, Morocco, COP 23 is expected to further lay the groundwork for the implementation of the Paris climate accord.

Through an exposure programme organized by the United Evangelical Mission, the WCC Working Group on Climate Change learned about various initiatives of local churches and governments in Wuppertal to contribute to lowering greenhouse gas emissions as well as plans for mobilization by broader faith and civil society groups during COP 23, which is slated to take place in Bonn, Germany from 6-17 November.

Though Bonn is the venue for COP 23, it is for the first time being presided over by a developing, small island state in the Pacific – Fiji.
Posted by Sandy Boyce at 6:48 PM No comments:

Sister Inga Bengtzon (20 July 1920 to 6 May 2017) has passed away at the age of 97 in Uppsala, Sweden. Sister Inga was President of DIAKONIA for some years. Her funeral will be Friday 2nd June in Samariterhemmets Church, Uppsala.

We give thanks for her life that was dedicated to faithful service, and for her inspiring leadership and wisdom.

Sister Inga served for 65 years as a Deaconess. She was a visionary. Here's one of her statements written in 1984 when she was Director of the Diaconia Foundation Samariterhemmet, addressing a Nordic diaconal meeting about the prophetic dimension of diaconia:

"Diaconia is foundational for the church, she argues. It “is and shall, and must be prophetic, fore- sighted, predictive, energetic, fearless – salt and light to the world.” Referring to the General Assembly of the WCC in 1983, she argues for the inclusion of a self-critical dimension of the diaconal role that challenges the church’s “locked, frozen, static and self-centred structures” in order to turn them into “workable, living instrument for the church’s task of healing, reconstruction and sharing with each other.” Diaconia cannot be limited to institutional forms. It must “break through the already established structures and demarcations in the institutional church” in order to act, heal, and build in the world. Prophecy is a message that must be advanced, regardless of cost, Bengtzon argues. But the prophet’s message is inconvenient, because it “exposes and opposes all situations and circumstances where people are violated against or violate God’s creation.” This is what it means to be “salt” in the world (Bengtzon, 1984, translated from Swedish).

Sister Inga published books and contributed articles to many journals. She served on many committees exploring diakonia, and engaged in many ecumenical dialogues on diakonia and the church.

Bengtzon, Inga M. “The Churches and the Diaconate in the Ecumenical and International Perspective”, 1985.

Congratulations to the five Deacons ordained in May in the Diocese of New York in May, 2017. 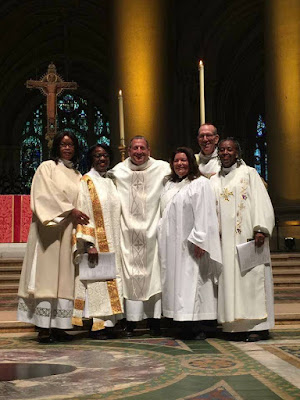 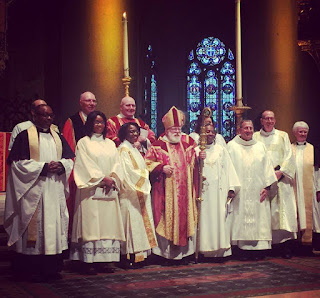