Diakonia of The United Church of Canada Statement of Vision

God calls us to diaconal ministry.
The gospel of Jesus invites all to this ministry:
to offer compassion and accompaniment,
to work for liberation and justice,
to act as advocates of creative transformation.
Diaconal ministry, as a recognized order, is rooted
within our faith tradition and history,
and it is continued and embodied
in an ecumenical, world-wide community.
This vocation is a journey
involving Spirit-filled enrichment and learning,
requiring humble offering of self,
demanding prayerful discernment and courageous risking,
exercising visionary and communal leadership,
promising joy and meaning,
and daring to imagine God’s abundance
in a world of love and respect.
Through education, service, social justice, and pastoral care,
diaconal ministry in The United Church of Canada,
encourages a growing faith,
speaks truth to power,
seeks mutual empowerment,
proclaims prophetic hope,
nurtures life-giving community,
fosters peaceful, right relationship,
within the church and the whole of creation
wherever the Spirit may lead.
Adopted at DUCC National Gathering, April 2009.
Posted by Sandy Boyce at 3:13 AM No comments: 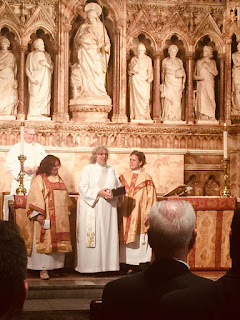 Posted by Sandy Boyce at 7:58 AM No comments: