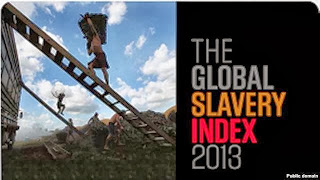 Today, October 18th, is recognized as Anti-Trafficking Day in the European Union and Anti-Slavery Day in the United Kingdom. You may know that human trafficking has been a particular focus for the DIAKONIA Executive over the last four years (scroll down to end for resolution and prayer), and highlights an ongoing issue around the world.

In a report released this week from the Walk Free Foundation, an estimated 30 million people are enslaved around the world. The Australian based group presented its findings on Thursday 17th October in its first Global Slavery Index (click on link to download) ranking of 162 countries by their prevalence of modern slavery. In compiling the index, researchers considered crimes such as human trafficking, forced labor and the exploitation of children. From forced labour on cannabis farms in the UK to the child workers in the cocoa industry of Côte d’Ivoire, an estimated 29.8 million people are enslaved today.

African nations comprise half of the group's top 10 rankings on index by prevalence, which also includes Haiti, Pakistan, India and Nepal in the top 5.

In a separate index, the foundation ranks India, China and Pakistan as the countries with the highest numbers of enslaved people within their populations. India is estimated by the index to have the highest absolute number of modern slaves. The nation of 1.2 billion is thought to include a whopping 14 million people who live in slave-like conditions, which include forced labor, forced marriage, exploitation of children and debt bondage.

The foundation found that Asia is home to about 72 percent of the world’s slaves.  China and Pakistan came in second and third behind India. China is thought to have about 2.9 million slaves. Pakistan, whose population is 1/7 that of China’s, has a stunning 2.1 million slaves.

Countries with high levels of slavery share poor development, corruption, poverty and conflict. Also, researchers noted, around the world, women are disproportionately affected by slavery, partly because of the prevalence of forced marriage and child marriage.

And the experience of girls and women slaves almost always has another, horrifying element - for almost every woman in slavery, there will be a sexual assault. It can be field, factory, working as a domestic servant or whatever. That's why the enslavement of women is particularly harsh.

Foundation researcher Kevin Bales: " I suppose if you're going to say, what's the most common type of slave today, I would probably point to two [types]. One would be a type of hereditary slavery in South Asia, where families are born into slavery, they die in slavery, where one family belongs to another family and has for generations," he explained.  "All you know is slavery. You expect to be assaulted; you expect to be raped; you expect no other life except that of a slave.

"The other, I think most common type of slavery today would be the person who’s an economic hopeful migrant," he continued. "Someone who’s looking for a way to better their lives, or the lives of their family and their children. And so they’re looking for a place of safety, they’re looking for a place of employment, and there are criminals who take advantage of that desire for safety and employment and lure people into situations outside their countries, their own country, where they can then be enslaved.”

The foundation says the role of government in addressing modern slavery, a human rights violation, is "paramount." The group says only governments have the authority to enact and enforce laws against slavery.

Human Trafficking is a worldwide problem and infects almost all countries and all economic systems. It is a form of modern slavery and the biggest money making system in the world. The DIAKONIA World Executive at its annual meeting in Moshi,Tanzania in July 2011 was confronted with the wideness of this reality. As an organization of people involved in diaconal ministry in 34 countries of the world we feel very much connected with the victims of this crime. We want to raise our voice to the elimination of the conditions that lead to and perpetuate human trafficking. We ask our member organizations and the churches we which we belong to raise awareness of human trafficking in everybody’s surroundings and do as much as they can to overcome this inhuman practice.

We ask you to join in our prayer:
Loving God, The broken creation yearns for wholeness. Many are sold for sex, in bondage and exploited in factories and fields. Many are starving and thirsty. Many are homeless and refugees. Many are fearful, distraught and hopeless. Many cry out for food, for shelter, for safety, for protection, for worthiness, for respect... for wholeness of body, mind and spirit. Forgive me for closing my eyes and ears to the cries and suffering around me. I commit to you my helplessness and ask you to open my eyes and ears that I can respond to the cries. Make me willing to be an instrument of your love and peace. Help me to take action so your love and peace become real in this world. Amen.