When the poor and needy seek water, I will open rivers on the bare heights, and fountains in the midst of the valleys; I will make the wilderness a pool of water, and the dry land springs of water.
Isaiah 41:17-18 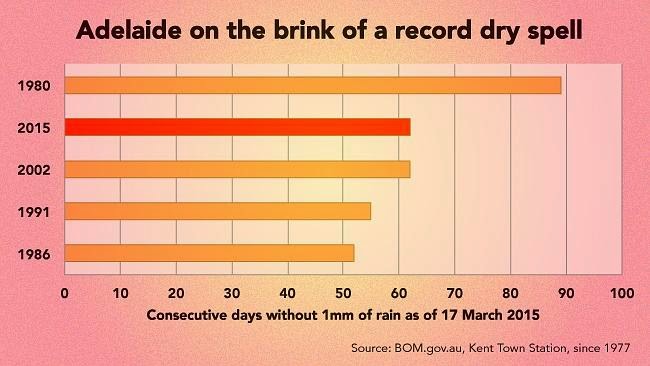 We have many visitors in our home, and always have to go through the routine of explaining the need to save the first cold water in the shower before the hot water begins (usually half a bucket) and to refrain from running the water in the sink to wash dishes (when the water just goes down the drain). We are diligent in using the cold water saved in the shower on our garden. Not a drop should be wasted! South Australia is known as the driest state in the driest inhabited continent. Most of SA is in the arid zone, and only the south-east gets good rainfall. The capital city, Adelaide, situated in the south of the state has an annual average rainfall of 528mm. This makes it the driest capital city in Australia. Farming by Europeans in marginal farming country in the northern part of the state has also increased desertification which has had a lasting effect of increasing South Australia's overall dryness. Adelaide is experiencing a significant dry spell of weather, the longest in 35 years with less than 1mm of rain. South Australia is fortunate to have good infrastructure and planning, and a desalination plant (controversial due to the cost of construction), so the dry conditions can be managed. We also have rainwater tanks (as do many Australians) - our tanks hold 13,500 litres, enough in winter to provide all our water needs in the wetter months of the year (although I'm amazed to learn that in many states in the USA collecting rainwater for personal use is illegal.
In the midst of a very dry spell where I live, I reflected on World Water Day, March 22nd (which falls on a Sunday this year and could be a focus for worship). World Water Day is an opportunity to focus on a precious resource becoming more scarce and denied to millions around the world. The top ten countries at risk of water shortages are here, and there are issues with companies such as Coca-Cola that have been heavily criticised for causing extreme water shortages in developing countries where supplies are scarce. In India, a Coca-Cola plant was forced to close after it was alleged to have contaminated local water, and in other areas farmers have been unable to irrigate their fields after the company established a bottling plant. It takes 2.7 litres of water to produce 1L of product.
'Across the world, cases of environmental damage, exploitation of water resources and abuses of workers' rights are shockingly common. It's time that directors of multinationals held to account - but that will only happen when politicians accept that the current free-for-all is failing the world's poor.' (Louise Richards, Executive Officer, War on Want).
Water concerns are no longer theoretical. The UN projects that 30 countries will be “water scarce” by 2025. Eighteen of the 30 are located in the Middle East or North Africa. Water scarcity will threaten the failure of already failing states and there are implications for people who risk becoming 'environmental refugees'.

Climate and weather patterns are changing natural water patterns. And industrial pollution is making water a scarce commodity. And expanding populations will also swell demand for agricultural water some 42% by 2030 in two decades (Fortune magazine). Agriculture accounts for 71%, and industry another 16% for a total 86% of all water use in the world. So the water left for the world's expanding population is only 14%!
“Consider the impact on the water supply when more people in developing nations begin living Western lifestyles. In India alone, water usage is expected to rise by nearly 100% over the next 20 years. Expanding populations will also swell demand for agricultural water some 42% by 2030.” (Fortune magazine).
"Water is the 21st century’s New Gold. And growing shortages guarantee price appreciation for this ever-scarcer commodity. What happens in the next 40 years when another three billion people come into the world? Imagine adding 75 million people every year, six million a month, 200,000 every day, all demanding more and more water to drink, to shower, to cook, to everything. All guzzling down the New Gold that’s getting ever scarcer". (Paul B. Farrell)
Across the globe, Nestlé is pushing to privatize and control public water resources. Nestlé's Chairman of the Board, Peter Brabeck, has explained his philosophy with "The one opinion, which I think is extreme, is represented by the NGOs, who bang on about declaring water a public right. That means as a human being you should have a right to water. That’s an extreme solution." At the World Water Forum in 2000, Nestlé successfully lobbied to stop water from being declared a universal right - declaring open hunting season on our local water resources by the multinational corporations looking to control them. For Nestlé, this means billions of dollars in profits. For us, it means paying up to 2,000 times more for drinking water because it comes from a plastic bottle.
And even something as basic (for western people) as a cup of coffee can be looked at differently when you know drinking one standard cup of coffee needs about 140 litres of water (by far the largest part for growing the coffee plant). The world population requires about 110 billion cubic metres of water per year in order to be able to drink coffee. (Source: Water Footprint Network)
What is your 'water footprint'?
More than 800 million people currently do not have safe drinking water and 2.5 billion people lack water for proper sanitation. Approximately 1 million children below five years of age die from diarrhea every year — 90% of diarrhea is due to “unsafe drinking water, inadequate sanitation, and poor hygiene.
The World Council of Churches has continued its practice to provide a Lenten resource, 'Seven Weeks for Water', with the 2015 theme, “Towards Water Justice: A Pilgrimage of Justice and Peace", with weekly contributions from writers in countries including Zambia, India, Philippines, Brazil, Korea, USA and Ecuador. We have DIAKONIA Assocations in all of these countries. These Lenten studies can, of course, be done at any time, to raise awareness of justice related to water.
The heart of diakonia is a focus on compassionate service. There are clearly issues of justice that also need to be addressed, lest the compassionate service is a 'bandaid' treating a gaping wound. 'Water justice' is an issue for us all, and especially where water increasingly becomes a commodity rather than a basic necessity to survive.

"The Church at all levels must raise our prophetic voice to encourage actions consistent with water justice, including strong and persistent advocacy for full realization of the human right to water and other aspects of water justice. We should lift up the voices of those especially affected by water injustice, including women, youth, the poor, and other marginalized groups. We should also seek to assure that all Creation is cared for in actions related to water".
(Participants of the Strategic Consultation of Ecumenical Water Network, Berlin, 2013).

God, Lead Us to Abundant Life and Peace through Water Justice!