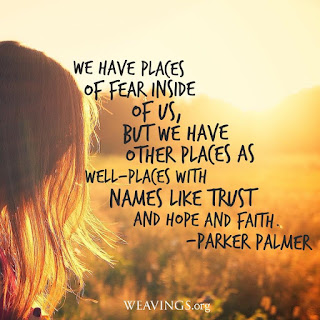 We have places of fear inside of us, but we have other places as well—places with names like trust and hope and faith. We can choose to lead from one of those places, to stand on ground that is not riddled with the fault lines of fear, to move toward others from a place of promise instead of anxiety. As we stand in one of those places, fear may remain close at hand and our spirits may still tremble. But now we stand on ground that will support us, ground from which we can lead others toward a more trustworthy, more hopeful, more faithful way of being in the world. Parker Palmer, "Let Your Life Speak"

God of Love,
in a world great with darkness
I drink your light.

In a world of violence
I soften my heart.

In a world of fear
I deepen my breath.

In a word of grief
I enlarge my embrace.

In a world of shouting
I open my roots.

In a world of fragments
I let myself belong.

In a world of walls
I go out into the streets:

I bear you to those
who are mad with hunger for you.

In a world of fissures
I return to you,
always to you. 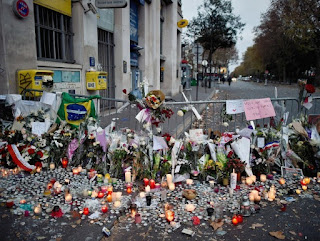 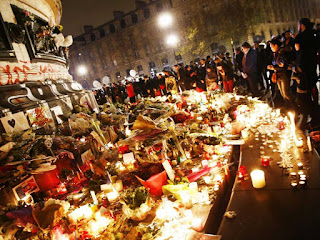 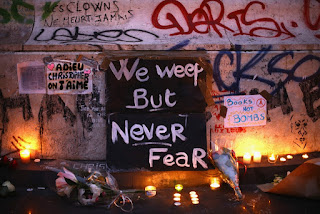 On Saturday, France’s Le Petit Journal sent its reporters to speak to parents with children at the memorials that have appeared across the French capital in the wake of the attacks. One little boy standing outside the Bataclan theatre, the scene of Friday’s deadliest attack, is asked if he understands why suspected Isis militants opened fire on crowded concert. Here is the conversation that follows:
Boy: “Yes, because they’re really really mean. Bad guys are not very nice. And we have to be really careful because we will have to change houses.
Father: “Oh don’t worry… We don’t need to change houses. France is our home.”
Boy: “But there’s bad guys daddy…”
Father: “Yes, but there are bad guys everywhere. “
Boy: “They have guns, they can shoot us because they’re really really mean daddy.”
Father:  “It’s OK, they might have guns but we have flowers.”
Boy: “But flowers don’t do anything, they’re for, they’re for…”
Father: “Of course they do, look, everyone is putting flowers down. It’s to fight against the guns.”
Boy: “It’s to protect? And the candles too?”
Father: “It’s to remember the people who have gone.”
Boy: “The flowers and the candles are here to protect us.”
Father: “Yes.”
Reporter: “Do you feel better now?”
Boy: “Yes, I feel better.”
Posted by Sandy Boyce at 6:35 AM