December 3 is the 'UN International Day of People with Disability'. There are many Deacons and Deaconesses who work with people with disabilities - physical and intellectual. (Would love to hear about your stories and experiences!)

Rev Andy Calder (Deacon) is a Uniting Church in Australia Minister, in the role of Disability Inclusion Advocate with the Synod of Victoria and Tasmania. Andy has be​​en an ordain​ed Uniting Church minister for 22 years. Prior to ordination in 1995 as a Uniting Church Deacon, Andy worked in a range of community and government contexts in program delivery, policy development and advocacy with people with disabilities. His current role is to broadly encourage and promote inclusion of people with disabilities within the life of the Synod of Victoria and Tasmania. 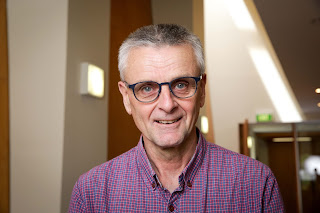 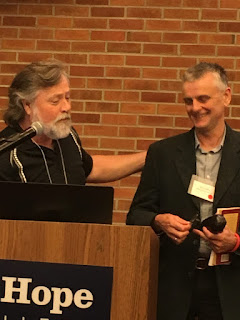 Andy has undertaken social action research as part of Ph.D. studies, exploring the spirituality of adults with intellectual disabilities. He has partnered with the Victorian advocacy body VALID (Victorian Advocacy League for Individuals with a Disability), and interviewed 14 people. His recently completed doctorate is titled: ‘Adults with intellectual disability and their spirituality: voices to be heard by faith communities and the disability services sector in Victoria, Australia’.

Arising from Andy's research, he developed a ‘Statement of Spirituality’ which has been adopted by VALID. It reinforces the importance and value of people's expression of their particular spirituality, which includes participation in religious communities. This is the first known time a non-faith based disability organisation has proclaimed such a public statement.

In 2019, Andy was honoured with the Henri Nouwen Award in recognition of his work with people with disabilities. The award is named after Catholic Priest Henri Nouwen, who served as a pastor at the Canadian L’Arche Daybreak community for people with intellectual disabilities and their carers and loved ones.

Andy is the first person outside of North America to accept the award, which is given by the American Association on Intellectual and Developmental Disabilities (AAIDD) Religion and Spirituality Division.

At the presentation, held at the Summer Institute on Theology and Disability in Holland, Michigan, past president of the AAIDD Neil Cudney said Andy had “demonstrated unswerving commitment to supporting people with disabilities.” Neil read out a long list of Andy’s roles and achievements that convinced the judges he was a worthy award winner. “We realised Andy embodied the spirit and intention of the Henry Nouwen Award".

Andy told those in attendance at the Hope College auditorium that it was “indeed a great honour to be this year’s recipients. It was most unexpected and will be deeply cherished".

Andy said, "Nouwen’s book The Wounded Healer with its theme of vulnerability in ministry continues to speak powerfully into my experience as a survivor of road trauma and my subsequent call to ordained ministry in the Uniting Church in Australia. In 1986, I was hit by a garbage truck and this proved to be my road to Damascus experience, which returned me to my church. I am so indebted to my own Uniting Church for its historic and continuing commitment to ministry with people with disabilities. Whilst this certificate has my name in it, in a very real sense, I feel that I am accepting it on behalf of so many people in Australia and New Zealand, all of us Down Under, and throughout the world who are striving to listen to and embrace people who continue to experience exclusion.”