Foundation of the Diakoneo Community Neuendettelsau

Foundation of the Diakoneo Community Neuendettelsau 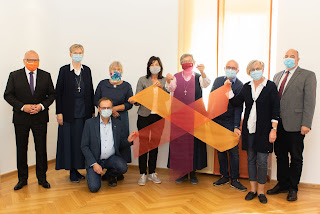 Within a year, the "Working Group Future of the Communities", consisting of representatives of all three communities, developed a future-oriented concept and sustainable structures.

At the beginning of October 2020, the new Diakoneo Gemeinschaft Neuendettelsau was officially founded in a meeting of the working group. "I am very pleased that this truly historic step for Diakoneo has been successful and wish the new community a bright future," said Rector Dr. Hartmann, Chairman of the Board of Diakoneo.

On October 23rd, the Board of Trustees of Diakoneo KdöR approved the foundation of the new community, which will in future be led by a council consisting of three members from each of the previous communities. This council will be headed by Rector Dr. Mathias Hartmann until the new leadership of the Diakoneo Community is appointed by the council. A selection process has recently been underway.

Until the new leadership takes up its duties, Sister Erna Biewald, the former superior of the deaconesses, and Sister Roswitha Buff, the former head of the Deaconical Sisters and Brotherhood, are members of the transitional council in an advisory capacity. They will retire next spring.

Different roots and yet the same intention

"All three communities have the task of shaping and helping to shape the diaconal profile of the work at Diakoneo," emphasized Dr. Mathias Hartmann, even if the respective roots are different. The Deaconess Community has existed since the founding of the Neuendettelsau Deaconess Institute in 1854. The almost equally old brotherhood and the sisterhood founded at the beginning of the 20th century merged in 1995 to form the Deaconess Sisters and Brotherhood. The community of employees in the diaconate was newly founded in 1999 as a supplement to the historical communities. The new Diakoneo Gemeinschaft Neuendettelsau has about 350 members, most of whom work or have worked for Diakoneo.