"Once a deaconess, always a deaconess" is a phrase often heard when talking to the women who are graduates of Harris Memorial College in Taytay, Rizal, Philippines. If they move to the United States, their dedication to serve God and their neighbors continues. Just as deaconesses and home missioners consecrated in the United States, they are committed to lifetime ministries of love, justice and service.

Seventeen deaconesses have transferred their relationship to the United Methodist Women Office of Deaconess and Home Missioner in the United States, with at least 33 more in the process of discerning or working on applications. 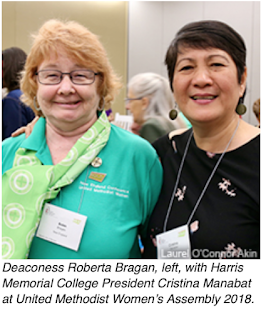 The training that deaconesses receive in the Philippines is extensive. All are graduates of Harris Memorial College, supported by United Methodist Women, where they earn a bachelor’s degree in addition to deaconess training. Classes in playing the piano or organ and singing are required, and deaconesses are appointed to local churches or other United Methodist institutions.

Deaconess Ellen Ronas Dizon became the transfer coordinator for the Office of Deaconess and Home Missioner in October 2020, supporting and assisting deaconesses from the Philippines who would like to transfer or reinstate their deaconess relationships in the United States. She graduated with a degree in Christian education and a minor in social work and came to the United States in 1988.

“My goal was to continue my service when I emigrated to the United States,” she said. “My grandmother and my mother have always inspired me to continue my ministry wherever I go.”

Dizon contacted Harris Memorial graduates and professors living in the States and began the process of transferring her appointment as a deaconess soon after she arrived. She was recommissioned in 1990, and her work here as a preschool teacher and director led to new opportunities to serve.

“It gave me the chance to work with new immigrant families who want to preserve their values and culture. I learned to embrace and respect each culture by learning their language and values, and understanding who they are and why they are. I also learned to understand children with various needs,” Dizon said.

“I retired as a preschool teacher and director after 27 years. My retirement has given me more opportunities to serve and the ability to move on to new mission ministries,” she said. “My challenge for myself is to bring awareness and to amplify the voice of the marginalized. No one deserves to be left behind because the Kingdom of God belongs to every being in this world.

Dizon said God wants her to continue to be active in service. In her role as transfer coordinator she connects with Filipina deaconesses interested in transferring their deaconess relationship to the United States.

“I will serve as their resource and advocate. I will continue to connect, support and do the best I can to bring the love of Jesus to my sister deaconesses, to my extended family at church, the community, and to the Philippines. Our brothers and sisters in all parts of the world must experience the Kingdom of God,” she said.

Deaconess Joy Hayag came to the United States in 2009, and in 2010 began the core studies that deaconesses and home missioners are required to take. She said the late Becky Louter, then the executive for the Office of Deaconess and Home Missioner, was intentional and supportive of deaconesses coming from the Philippines.

“I first started working as a volunteer at churches where my husband was appointed. You name it, I did it!” she said. “I was a graduate of Harris Memorial College in 1994 and was commissioned in 1995. Once you graduate at Harris Memorial College you are expected to play piano or organ, especially when appointed to small churches, so that you will be a ‘jack of all trades’ they say, and you can do anything.”

Hayag has worked as a director for children’s and family ministries since 2015.

“I love my work here at Christ United Methodist Church,” she said about the church in Rockford, Illinois. “My work here is mostly with the families and their children. I design, designate and lead programs that promote spiritual formation.”

She quoted Cristina Manabat, the current president of Harris Memorial College, as often saying that Christian education is the heart of the church. Manabat was once her teacher.

“That phrase will always stay in my mind and heart, how she shared with us the importance of Christian education formation in the church. It is a big plus for me as a Harris graduate who was molded and trained to do this kind of work.”

Dizon and Hayag both cited Deaconess Liwliwa Robledo, former president of Harris Memorial, as a mentor in the Philippines and after they came to the United States. Dizon said, “She was my teacher at Harris and became a great mentor and adviser to my Harris siblings and me when we migrated here. She was like a second mother to me. She is an inspiration and a role model for us. She always encourages us to continue caring for one another, to be active in United Methodist Women and National Association of Deaconesses, Home Missioners, and Home Missionaries and to continue our ministry.”

Hayag calls Robledo ‘Ma’am Liw,’ and got to know her when Hayag was appointed to a church in the Philippines that Robledo’s family members attended. She and Robledo became close, partly due to their mutual love of music, and Robledo continues to support and encourage her.

In 2018 the Office of Deaconess and Home Missioner updated the requirements for deaconesses transferring from the Philippines with the help of Robledo, Manabat and Elaine Robinson, then dean of education for the Order of Deaconess and Home Missioner. Deaconess Megan Hale, the office’s executive for candidacy, said they wanted to honor the experience and rigorous education the women receive at Harris. Under the new guidelines, the only course required is Theology of Mission, which is a requirement for all deaconesses and home missioners in the United States. The office also provides some professional development to highlight changes in doctrine and polity and the history of deaconesses in this country to those transferring.

Deaconess Cecil Bucud-Arceo became the first to attend the Theology of Mission course since the process was updated and helped with the navigation of the process. Bucud-Arceo served in the Philippines for 20 years, where her first appointment was as a kindergarten teacher and director of Christian education. The next year she was appointed to Harris, where she taught from preschool through college level.

“I made it a point to be of help wherever I was needed. I volunteered as church pianist, choir director, Sunday school teacher, choral conductor and recital pianist, and I led in organizing Christmas cantatas,” she said. She was active in conference committees and participated in Central Conference gatherings and General Conference.

“Here in the United States, I serve as a children’s ministry director. As in the Philippines, I am always willing and available to serve wherever and whenever I am needed for the glory of God. I am happy and blessed in this ministry.”

In October 2020, Deaconess Ruth Serquina became the latest from the Philippines to attend Theology of Mission in order to transfer her relationship to the Office of Deaconess and Home Missioner. Her friends encouraged her to take the step when the class became virtual this year due to safety concerns related to COVID-19. She came to the United States in 2008, and while visiting her in-laws in Texas met the pastor of First Filipino American United Methodist Church in Houston. The church needed a children’s ministry director and helped her get approval to stay in the country. She began her work there in October 2010. Like the other deaconesses, in the Philippines, her ministry included many different aspects of church and community work, but at First Filipino things were different.

“I was only focused on the children’s ministry and the responsibilities assigned to me,” she said, although she also played the organ for funeral services. Now, because of the pandemic, she is working for a home health agency helping elderly patients obtain the care they need and volunteering at the church, but she hopes to return to fulltime church work when the pandemic is over.

In February 2018, Hale and Deaconess Cindy Johnson were invited to attend two Harris Memorial Alumni events in Northern and Southern California. When she spoke to the group in 2019, Hale said, “One of my favorite memories from the first of our two events was when we decided to open with a hymn. I was amazed how quickly our hosting deaconesses jumped into action, several of you volunteering to accompany on the piano, and everyone singing in joyous harmony.”

That joyous harmony is evident in a video of the virtual choir that came together for the NADHM Convocation that met online in November. Hayag coordinated the choir, which sang “Love Grows Here,” and her son, Frenz Joshua Hayag, put the individual submissions together. The majority of the singers are Harris graduates. The video can be found by searching for “NADHM Virtual Choir” on YouTube.

Harris Memorial College began as a Bible training school for young women in 1903, partnering with missionaries from United Methodist Women predecessor the Woman’s Foreign Missionary Society and named after Norman Waite Harris, who provided funds to start the school. Now a premier deaconess training school, United Methodist Women continues its relationship with Harris through Mission Giving and an ever-deepening connection with the Office of Deaconess and Home Missioner.