This is just a sample of the ordination of Deacons in the Church of England in the last few weeks. Please pray for them as they immerse themselves in ministry. Some will go on to be ordained priest next year and some will continue as distinctive deacons.

IN THE DIOCESE OF WEST YORKSHIRE AND THE DALES
People from all walks of life are coming to strengthen and serve in the Church of England as 47 deacons (and priests) are ordained this season including a former Sandhurst cadet, a physiotherapist, a retired teacher, a practising solicitor and a former nurse. These are just some of the first men and women to be ordained in cathedrals across the new Diocese of West Yorkshire and the Dales. The ministry placements include a pioneer curate, a chaplain for businesses in Leeds, a distinctive deacon, a mental health minister from Barnsley and a Fresh Expressions minister.
(from the diocesan website http://www.westyorkshiredales.anglican.org/?q=content/first-ordinations-new-diocese ) 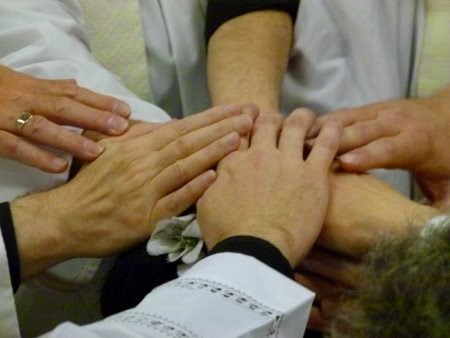 DIOCESE OF BLACKBURN
Pauline Taylor, parish of St.John the Baptist, Broughton as SSM

GLOUCESTER DIOCESE
On Sunday 6 July, 12 people were ordained as deacons in a service led by the Bishop of Gloucester, the Rt Michael Perham. They are:

Thirty six men and women joined London's team of clergy on June 30th as they were ordained deacons at St Paul’s Cathedral by the Bishop of London, Richard Chartres. (Hear his sermon here). The new deacons bring a huge breadth of age, background and experience to the family of clergy in the Diocese of London. The new deacons will be working in churches across London, serving their local communities and undertaking public worship, teaching and pastoral work. Some of the Deacons are 'transitional', meaning that after a period of normally a year, a deacon is ordained to the priesthood. Some Deacons in the Church of England are 'distinctive deacons'.

Among the new deacons are:

Ajay More will join the team at St James Church, Alperton in Willesden. Ajay was born and brought up in Maharashtra, India, where he worked as a hospital Microbiology Technician, before getting married to Kavita and moving to London where he trained as a nurse. After practicing in A&E and Endoscopy Department for over seven years, Ajay felt called to expand his involvement in the church to full time ministry and trained at St Mellitus College. Ajay's particular interest is Asian Christian Ministry and expanding the ways that the Church of England reaches out to Asian communities. He will be playing an important role at St James's as the church supports the community during the regeneration of the surrounding area.

Peter Wolton will join the team United Benefice of Holland Park in Kensington. After graduating, Peter spent 30 years as a fund manager, working first in property asset management and then managing UK pension funds. He then went on to manage a number of businesses – one of which took him to Japan for four years – before taking up his position running a London-based not-for-profit primary school company, which aims to provide a first-class traditional education with a focus on developing a positive attitude to learning. Peter has an extensive background in managing and growing businesses and is a firm believer that the best way to grow an organisation is to grow the people within that organisation, something he hopes to reflect in his ministry in Holland Park. Peter also hopes to use his experience to act as a bridge between the Church and the world of work.

Maxwell Hutchinson will join the team at St John on Bethnal Green in Stepney. Prior to training for ordination, Maxwell was an established architect, broadcaster and composer. During this time, Maxwell was a regular contributor to BBC Radio Four, BBC London Radio and Newsnight and even presented Songs of Praise on two occasions. Maxwell has received various awards for his work, including the Sony Radio award in 2009.
In 2004, when on holiday in Sri Lanka with his wife, Maxwell was caught up in the devastating Tsunami where he was declared missing, presumed dead. Maxwell survived by escaping to a mountain top village, where the local villagers supported Maxwell and his wife until it was safe to return to the town where they were staying.
Maxwell hopes to use his expertise as a musician and artist to help develop art projects connected to churches in East London.

IN CHICHESTER
Seventeen men and women were ordained as deacon by their diocesan bishop, Dr Martin Warner, at a moving ceremony in Chichester Cathedral on Saturday June 28. They are now ordained deacon, equipped to serve the church and wider community. They will now take up their title post in the parishes as follows.