So, why is a Minister of the church, and President of World DIAKONIA, participating in a peaceful, non-violent protest vigil in a politician's office? Speaking out for the children held in immigration centres, most of whom have fled violence and war in places like Iraq, Afghanistan, Syria, and Sri Lanka, and others who are escaping oppression, and persecution. Currently immigration centres are a focus of attention in Australia, with the community continuing to ask questions about immigration policies and seeking a more compassionate response to those seeking asylum. On June 23rd, 2014, a group of nine religious leaders held a peaceful protest vigil in the office of MP Jamie Briggs in Mount Barker, asking 'when will the children be released from detention'?. It was part of the #Love Makes A Way movement. At the end of the day, all 9 were arrested for trespass. Pilgrim Uniting Church ministers Rev Jana Norman and Rev Sandy Boyce were part of the group. Although the Uniting Church has a Code of Ethics that forbids ministers to be involved in illegal activity, it makes provision for those involved in non-violent and peaceful protest. The Moderator of the Uniting Church in South Australia, Dr Deidre Palmer, was supportive, and provided a character reference for Sandy and attended court on the day to support her. About 30 others came to the court to express their support for Sandy, and for the group's action on behalf of children in detention. The following statement was prepared by Sandy for her court appearance last week.
Your Honour, thank you for the opportunity to speak today, to give an account of myself in relation to the trespass charge. 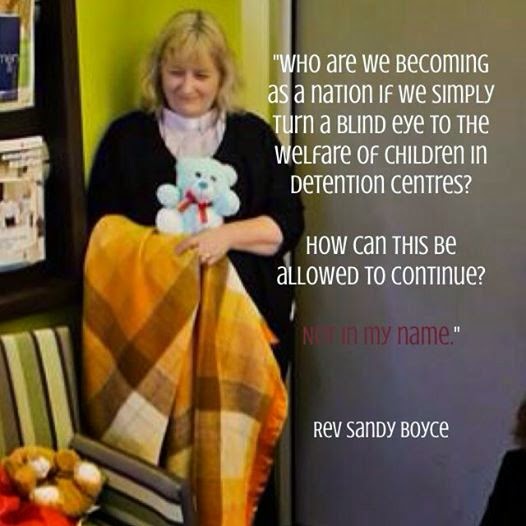 I was part of a group of 9 people who gathered for a peaceful, non-violent action focussed on a common concern for children in detention, and asking the simple question, when will the children be released from detention? The group included a Jewish rabbi, a Quaker (Society of Friends), and 7 Christians including 4 Uniting Church ministers. We prayed, we sang, we shared stories, and found ourselves in remarkable company as we discovered common journeys and commitment. We each took a soft toy, and we left them in the office at the end of the day. The soft toy has become a symbol for the children held in indefinite detention - a symbol of a child’s innocence, as well as their vulnerability and need for comfort and consolation.

Your Honour, the situation for children in Australian detention centres is of great concern, especially in offshore detention centres where hundreds of children are in mandatory detention, some without their families. United Nations guidelines clearly state that children seeking asylum should not be placed in detention for anything more than what is absolutely necessary for health checks and security checks. Instead, children are being held in indefinite detention, and the emotional, psychological and physical harm being reported should be of great concern to all people of good will. Some children are responding to their living conditions in ways that are pitiful - self-harm, insomnia, trying to poison themselves, illness and poor health, banging their heads against the wall, bed wetting long after toilet training, depression, even a young girl who tried to hang herself with her hijab. How heartbreaking to read the statement from a 15 year old on Nauru: ”This is a bad life. I fled from war in Iraq but got stuck in harsh jail in Nauru where is nothing but cruelty. We want justice. This is not fair. There is no standard in Nauru. This is a hell for children.” The former head of mental health services for detainees, Peter Young, has revealed the Immigration Department asked him not to report on the rates of mental distress and disorders among children and that the department was "concerned about what the figures are showing”. In the first 3 months of this year, the department's own data shows 128 children self-harmed. It is unacceptable. Immigration detention is no life for a child. All children are precious, and we share responsibility to ensure the welfare of children, which should not be dismissed as mere sentiment.

If children displayed these kind of behavioural responses arising from their living conditions in the wider community, it would be spoken of as neglect and child abuse. Yet this deplorable situation is allowed to continue in detention centres. Only last Friday, the Immigration Minister said that children in off shore detention centres would not be eligible for release because it was those conditions that were stopping ‘more children coming on the boats’. However one justifies children in indefinite detention, it is unacceptable. It goes without saying that the longer the children are held in detention, the more significant their mental suffering. Psychiatrist Peter Young has said, ”If we take the definition of torture to be the deliberate harming of people in order to coerce them into a desired outcome, I think it does fulfil that definition.” We desperately need an alternative to provide better care for these vulnerable children, and Australia has the capacity to positively support their well-being.

The peaceful, non-violent action in which I participated simply asked the question, when will these children be released from detention? Our group sought to highlight their plight and their vulnerability, and to urge that they be released into community care while their applications for asylum are processed. Indeed, a coalition of church agencies and not for profit organisations has offered to work with the Government to arrange community accommodation and appropriate support for families and young children while their applications are processed, but that offer has not been acted upon.

Christians are called to follow the example of Jesus and my Christian faith seeks expression in the way I demonstrate compassion and care, build peace and seek justice, and contribute to the common welfare. Faith is personal, but never private. In my work as a Minister in the Uniting Church, I seek to link the biblical narrative with the practice of faith. I am glad to be part of Pilgrim Uniting Church which from its beginning has been involved in seeking justice and working for the community good. This congregation has for many years actively supported refugees and asylum seekers, with regular visitors to detention centres, sponsoring family reunions, providing practical support and care, and building ongoing relationships. I am proud to say that the Uniting Church nationally has been involved in speaking out for the welfare of asylum seekers, and for children in detention, and challenging government policies that are cruel and harsh towards vulnerable people.

Such an action was not out of the blue. I am not an accidental activist, but rather someone who has carefully considered ways to raise awareness about this important issue that affects the very character and soul of our nation. Who are we becoming as a nation if we simply turn a blind eye to the welfare of children in detention centres? How can this be allowed to continue? Not in my name.

I worked as a teacher in schools for 20 years, mainly with primary school aged children. We all know that these are critically formative years, when a child’s sense of worth and well-being is shaped, and when they are making sense of the world. For a child, these early years are the foundation which will inform their adult life, and when core values and attitudes are shaped. How can we expect children to develop into generous, kind, compassionate, and confident adults when they are struggling to survive in the midst of difficult living conditions? How can we expect children to be strong, joyful, robust, and resilient, when freedom has been denied, when they face indefinite detention through no fault of their own. How can we expect children to make sense of the world and grow into maturity when their education is spasmodic, when they are denied a stable home environment with emotional security, and when their sense of confidence for the future is compromised.

The actions undertaken by those who decided to sit in Jamie Briggs’ office was prompted by the one question, when will the children be released from detention? It is a reasonable question - with precedent. The Human Rights Commission report released in 2004 found mandatory immigration detention of children was inconsistent with Australia's international human rights obligations and that detention for long periods created a high risk of serious mental harm. Subsequently, the then Prime Minister John Howard released all children and their families from detention.

I am grateful to the staff in MP Jamie Briggs’ office who allowed the group to sit together in the office foyer. They were respectful and did not at any time ask us to leave, until the office was due to be closed at which point we were asked if we planned to leave. When the police were called, they were also respectful in the way they related to the group, and did their job professionally. None of the group I was with had been in such a situation before, so it was a new experience to find myself in handcuffs, being driven to the police station in a police car, and going through a somewhat alien process of fingerprinting, DNA swabs, photos, frisking, questions, and so on. It seemed to me that I had a tiny glimpse into the world of asylum seekers who undergo a screening process determined by Australian authorities. With language difficulties and limited access to legal representation, it is much harder for asylum seekers and the policy of indefinite detention is breaking people’s spirits. The children in detention long for freedom, to be children who can enjoy life with unbridled joy.

I welcome the announcement this month that 150 children under 10 in detention in mainland detention centres will be released into the community over the next 5 months - but the 331 children living in camps on Nauru and Christmas Island, and more than 400 aged over 10 on the mainland, will remain in detention. It is my hope that change can and must happen, that decisions can be made based on compassion and justice.

It is not illegal for people to seek asylum, regardless of how they arrive.

Your Honour, thank you for the opportunity to share my story.

The magistrate, Special Justice Steven O’Sullivan, waived court fees and did not record a conviction, but did impose a small fine of $50. 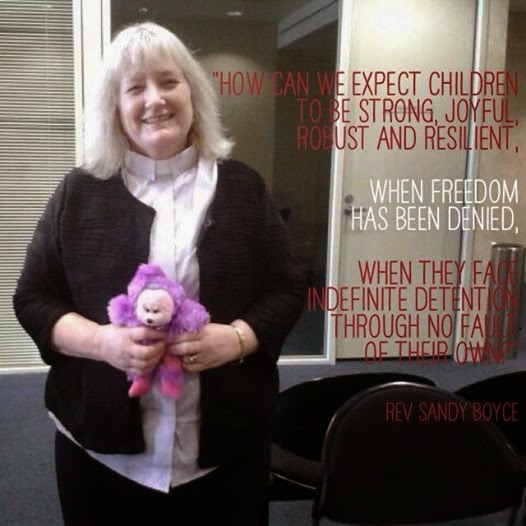 And to put the record straight, the group knew there was a risk of arrest, but that's not the same as 'wanting to be arrested' as was stated in the article based on the police prosecution allegation.
Posted by Sandy Boyce at 8:16 AM