Last night, a gathering was held at Pilgrim Uniting Church, 'Stronger Together: A service of solace', to offer support for those grieving the state execution by firing squad of eight people in Indonesia. They had been convicted of drug charges, and the group included 2 Australians, 3 from Nigerian including  gospel singer Okwudili Ayotanze, one from Ghana, one from Brazil and one from Indonesia.

The eight death row inmates walked onto the killing field singing religious songs before they were executed. Pastor Karina de Vega, who had been present at the execution, said, “They sang one song after another. Praising God. They sang a few songs together, like in a choir. The non-Christian I believe sang from his heart. It was such an experience.” The 8 men refused to wear blindfolds, preferring to look ahead and face their executioners. The group was shot by a 13-member firing squad while singing ‘Bless the Lord O My Soul’. Pastor Karina said the men conducted themselves with 'dignity and strength until the end'.

In recent months, Amnesty International had held a campaign, 'Keep Hope Alive', to seek a change to the death penalty and imminent executions in Indonesia. The campaign is associated with Amnesty's long standing opposition to the death penalty around the world but it became very personal to Australians who have followed the saga of the 'Bali 9', and in particular Andrew Chan and Myuran Sukumaran, who  received the death sentence and had been on death row for many years.

During their time in Kerobokan Prison in Bali, Andrew Chan had become a Christian and his life had been transformed. Recently he was ordained a Christian pastor and led services in the prison. He is reported to have said, "When I got back to my cell, I said, 'God, I asked you to set me free, not kill me.' God spoke to me and said, 'Andrew, I have set you free from the inside out, I have given you life!' From that moment on I haven’t stopped worshipping Him. I had never sung before, never led worship, until Jesus set me free."

Myuran also converted to Christianity while imprisoned. He also become an accomplished painter, painting right up until the end of his life. He taught English, computer, graphic design and philosophy classes to prisoners. Prior to his death, he was working on a Fine Arts degree.

Both Andrew and Myuran had given their lives in prison to inspire, encourage and support others to make the most of this one precious life and to get involved in meaningful pursuits rather than waste their lives.

British grandmother Lindsay Sandiford, on death row in Indonesia, said of Andrew and Myuran:
"I didn't know those men at the time they committed those crimes 10 years ago. What I can say is that the Andrew and Myuran I knew were men who did good and touched the lives of a great many people, including myself...the men shot dead were reformed men - good men who transformed the lives of people around them. Their senseless, brutal deaths leave the world a poorer place.”

Richard Branson said:  (paraphrasing Oscar Wilde): ‘The only difference between saints and sinners is that every saint has a past while every sinner (should have) a future.’ “Everyone deserves a second chance. Let’s do away with the death penalty once and for all.”

Cheryl Lawrie, a prison chaplain with the Uniting Church in Australia, said: 'I hope one consequence might be that we embody the mercy that we wanted the Indonesian government to show - that I might show mercy to all those who are fighting for a second chance here in Australia, especially those I have too easily written off. That feels like a fitting tribute I can make to two flawed and remarkable men'. 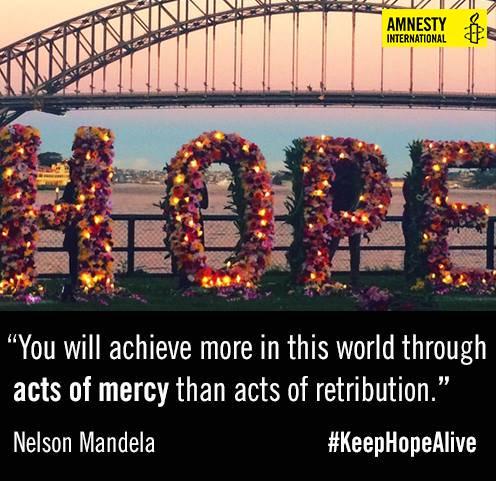 Simon Smart is director of the Centre for Public Christianity, writes:
It is hard to imagine the final thoughts of Andrew Chan as he waited, tied to a stake, for bullets to tear into his flesh and swiftly bring his life to a violent, inglorious end. If you contemplate this even briefly you can sense something of the chilling terror of that moment. It's a tragedy when any life ends prematurely, but somehow the cold mechanical intentionality of execution carries an especially grave weight. Australians have been feeling that weight of late, despite the fact that executions are routine in various parts of the world, including in the United States.
Chan famously became a Christian in jail, studied theology, and right up until his transportation to Nusakambangan Island led the English worship service in Kerobokan prison. In recent weeks he was ordained as a minister of the church. He attributed his radically changed life entirely to his religious conversion.
Not everyone buys it. "Jailhouse religion" is a pejorative term for crims finding God in the slammer in the hope of a reprieve or better treatment. There have been some notorious ones. Charles "Tex" Watson, Charles Manson's right-hand man, has been a Christian since 1975 and these days, despite being unlikely to ever be released is an ordained minister. Even serial killer Ted Bundy claimed a dramatic conversion on his way to the electric chair.
But as his appointment with death loomed, Australians became familiar with the stories of Chan, (along with fellow convicted drug trafficker Myuran Sukumaran), having become a model prisoner and an inspiration to other inmates to clean up their acts and get involved in meaningful pursuits rather than waste away.
And while myriad voices, from politicians to celebrities of various stripes have "stood for mercy" and begged for forgiveness, others have resolutely focused on the victims of the drug trade and the many lives that stood to suffer irreparable damage had the infamous shipment of heroin made it through customs in Australia a decade ago. These people are finding it hard to feel much sympathy for the condemned pair, believing Chan and Sukumaran's perilous journey was utterly selfish. They knew the risks and simply had to accept the punishment.
Chan certainly faced up to his crime and accepted that he was profoundly in the wrong when he embarked on that ill-advised venture as a 21-year-old. The Christian faith that he claimed as his own has never been about a gathering of the "good people", rather it is more like the "league of the guilty", as Francis Spufford called it – the solidarity of those who know they need forgiveness and redemption.
Chan considered his former life a waste and of no benefit to anyone, and it was in reading the Bible that he came to see the value of being a blessing to others. Despite his incarceration he interpreted his conversion as being set free from the inside. He is now famous for being such a calming and life-affirming presence among the other prisoners that even the Korobokan prison governor was one of those appealing for a last-minute reprieve.
Close observers have noted how calm and positive the 31-year-old Chan – who married his fiancée on the eve of his execution – remained right to the end. Jeff Hammond was for four years a spiritual counsellor and pastor to Chan. After visiting him for the last time he said: "He's got a peace within his own heart ... his hope whether he lives or whether he dies [is] that the fruit that he's been able to produce will continue to be a blessing to other people."
What do we make of this hope that Chan carried with him right up to his death? It's fair to say that if there is no God and his radically changed life was all the result of some grand illusion then the whole sorry episode does begin to look like a meaningless waste for all involved. More broadly such a lack must mean that there is no hope for ultimate justice or mercy for any of us. And perhaps that's right and we need to face it. Religion as a crutch is a familiar trope for those who aren't convinced of its substance.
But if Chan was onto something all those years ago when, in solitary confinement, he first sensed God alongside him as he read the gospel accounts of Jesus' life, then he joins many others who have gone to their deaths in similar circumstances, not glad of the fate that awaited them, but hopeful, even confident that through their death they were in fact being ushered into life; that they were in a mysterious but profound sense going home.
Dietrich Bonhoeffer​, the famous German theologian executed by the Nazis for his part in a plot to kill Hitler, died when he was 39 years old and engaged to be married. The Nazis sent him to the gallows at Flossenbürg concentration camp two weeks before it was liberated. As he was led away from his cell he is reported to have said to another prisoner, "This is the end ... For me, the beginning of life." It is the very idea that gave Chan a reason not to utterly despair as he stood to face the dreaded line of rifles pointed cruelly in his direction.
Given the torment and unimaginable stress of recent months when any night a knock on his cell door could signal the end, perhaps he also felt the release of a weight built up over a decade of anguished expectation expressed immortally by Dickens' Sydney Carton on his way to the gallows in A Tale of Two Cities, "It is a far far better rest that I go to than I have ever known."