I have thought long and hard about this particular post. Should I post this on the DIAKONIA President's blog? But here it is.

And the starting point is the basic truth that 'as followers of Jesus, we are called to name gender-based violence as a sin against God and a breach of the love, trust and care that Christ embodies and calls us to model. All women should experience safety, respect and dignity and the fullness of life that God intends for us all' (A statement by Dr Deidre Palmer, President, Uniting Church in Australia)

This week, thousands took part in 'March4Justice' rallies in Australia to highlight gender based violence (GBV) and to 'speak truth to power' and to vested interests that protect perpetrators and silence victims. In London, thousands rallied in London to express their horror at the abduction and murder of Sarah Everard at the hands of an off duty police officer. And in the USA a 21-year-old evangelical (baptised in 2018) has been arrested for shootings at three Atlanta-area spas, killing 8 people including 6 Asian-Americans. (Interesting article here about the link between a particular kind of evangelical thinking and practice, and objectification and vilification of women. How we do our theology really matters!).

Sadly, so many more examples could be added...

In many countries gendered violence is normalised as a 'domestic' issue rather than a criminal matter. In the USA, one in five black women are rape survivors. One in four black girls experience sexual abuse. Amnesty International reports that in the Pacific region almost 70% of women and girls experience rape or other sexual violence in their lifetime, one of the highest rates in the world. This is often at the hands of a partner or family member. A culture of shame and victim-blaming prevails, so many crimes are not reported, and the ones that are often go unpunished. Few Pacific Island nations have specific laws that make violence against women and girls a crime. Any existing laws are also poorly upheld. Truth be told, this is replicated globally. Around one in three women worldwide have experienced physical or sexual violence – mostly by an intimate partner. Around 38% of all women who are murdered are killed by their partners. The World Health Organisation says that violence against women has reached "a global health problem of epidemic proportions." Gender-based violence (GBV) is a profound and widespread problem, which disproportionately affects women and girls. It is systemic, and deeply entrenched in institutions, cultures and traditions globally. In countries where there is extreme poverty as well as cultural obligations to stay with a partner, leaving a relationship may not be an option for many women experiencing abuse.

(Churches and agencies are working on programs that directly address this and with a focus on empowerment of women and girls - but it is such a huge, deeply entrenched issue). 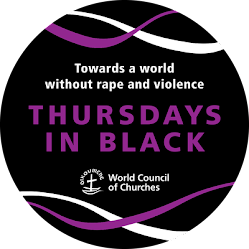 DIAKONIA World Federation (DWF) Executive Committee has for many years supported Thursdays in Black, a World Council of Churches campaign for a world without rape and violence. (Watch the video here). You are encouraged to wear black and a badge/pin on Thursdays, and to use it as an opportunity to raise awareness, and speak truth in the public arena rather than perpetuate a culture of silence. While classified as a crime in many countries, sexual assault is often treated as a private issue, with the victim being effectively silenced. Enough is enough!

The campaign is simple. Wear a pin/badge to declare you are part of the global movement resisting attitudes and practices that permit rape and violence. Show your respect for women who are resilient in the face of injustice and violence. Encourage others to join you. (Often black has been used with negative racial connotations. In this campaign black is used as a colour of resistance and resilience). Share your Thursdays in Black photos on Twitter, Facebook and Instagram, using hashtags #ThursdaysinBlack and #WCC! Post photos on the DIAKONIA Facebook page. (Thanks to people in DOTAC who regularly post photos of themselves wearing their Thursdays in Black pin/badge). 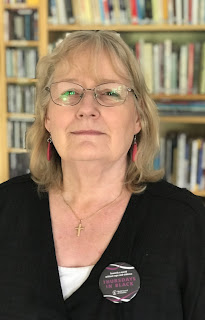 So, why would DIAKONIA World support the Thursdays in Black campaign and other initiatives related to GBV? Why would churches give a priority to raising awareness of GBV?

To quote Cornel West, Never forget that justice is what love looks like in public.

In the Bible, justice fundamentally has to do with right and good relationships. It describes conditions - material, social, physical, emotional, and spiritual - in which people flourish in right relationships with God and with each other. When something damages or ruptures those relationships, doing justice involves setting things right. Justice involves integrity, wholeness, and wellness for people and their relationships.

God of the entire universe, all people are made in your image. They are known by you and loved by you. All the resources of the world are yours. God, please bring your boundless resources to help women and children around the world who are experiencing violence of any kind. You know each of them by name. We only hear of them, but you see all.

We pray for governments around the world to rule wisely and to make and enforce laws to protect women and children from violence. Please provide support agencies with the resources they need to provide for the needs of victims.

And please change the culture that permits, ignores, downplays or excuses violence against women and children throughout the world. Please give your grace, comfort and healing to all those who suffer. Amen. (Source: Common Grace, 16 days of prayer against domestic and family violence)