This week the Tanzanian President John Magufuli died, reportedly from COVID19 though publicly announced as a heart attack. Magufuli was one of Africa’s most prominent COVID skeptics, and had repeatedly claimed that Tanzania, a country of some 60 million people, had defeated COVID-19 with God’s help and the power of prayer.

It is one year since the World Health Organization declared the spread of COVID-19 a pandemic. The President’s death happens at a time when anxiety and fears over the continuous spread of the COVID-19 virus continue to escalate, and when people are dealing with multiple losses of life in their own families and communities. 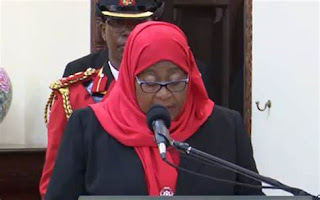 Vice-President Samia Suluhu Hassan has now taken his place as the country's head of state. She becomes Africa's only current female political leader (the Ethiopian presidency is a largely ceremonial role)  and joins a short list of women on the continent to have run their countries. The 61-year-old is affectionately known as Mama Samia - in Tanzanian culture that reflects the respect she is held in, rather than reducing her to a gendered role.

Let us uphold the people of Tanzania at this point in history when they are experiencing stress and uncertainty.

At this time, we also remember the four Member Associations in Tanzania in this time of upheaval and pray for a smooth transition in political power, and wise decisions for the good of the country.

This week, a new prayer book, “Voices of Lament, Hope and Courage,” was published by the World Council of Churches, and will be a guide for the special upcoming WCC “Week of Prayer in the Time of the COVID-19 Pandemic” from 22-27 March. It is free to download.

Rev. Dr Odair Pedroso Mateus, interim WCC deputy General Secretary, said: “We have seen the critical role churches have played and continue to play in all the areas of the human condition affected by COVID-19: mental, physical, economical, spiritual, and environmental. With this week of prayer, we hope to help share the stories that allow us to grieve and keep us inspired to continue to act with solidarity and impact.”

Here is one of the prayers: “God of hope, our hearts overflow with gratitude for your abiding presence during these exceedingly difficult and troubled times. May the flames of hope remain aglow among individuals, families, communities and nations during the pandemic.”

Please keep Tanzania in your prayers, and the welfare of our 4 Member Associations.